Programmes, or team-sheets as they were mostly back then, were introduced in Norway around WW 1, with the Norwegian FA producing newspaper style programmes for internationals and cupfinals. At club level programmes were issued only on irregular occasions. Our own club produced a single page team sheet for their first game after the club’s formation in 1919 (picture right), but after a few more team sheets throughout the early 1920s, the programme only made a return on a regular basis in 1969.

Even then, the 8-page programme (picture left) only included a line-up on the front cover and recent results on the back-page. The rest of the programme was made up entirely by small advertisements. The EIK-programme improved considerably from 1976 onwards, with the introduction of a few photos in each issue, and reached a good level by Norwegian standards in the early 80s, when crowds of around the 1000-mark were common.

Later, as crowds declined following relegation, the standard of the programme also declined, with only a single sheet being inserted into a pre printed season programme. However, the standard started to improve again around 2000, and over the next seasons we issued a programme second to none at our level, with the 48-page special souvenir programme produced for the friendly against Birmingham City (right) in July 2005 being amongst the most comprehensive Norwegian club programmes ever produced.

In 2006, our 32 page programme was voted Norway’s 3rd best clubprogramme, and after a few years with programmes of only 8-12 pages, our 20 page square format programme for the 2012-season proved very popular 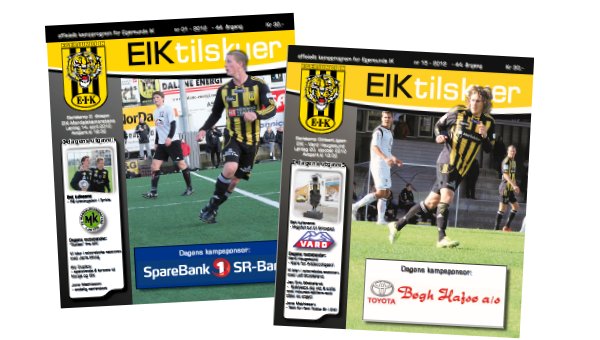 However after a few seasons where the programme cost Nkr 30, we realised that not enough fans were willing to buy the programme to justify the time used to produce it, so by 2016 we were back to an 8-page programme which was handed out freely to all paying spectators.

Over the next seasons, our programmes has varied in size and content, but to commemorate our centenary in 2019, we produced a 16 page full colour programme with a lot of historical content.

When Covid 19 struck in 2020, we were forced into making our programme digital only. While this is not what programme collectors want, the level of readership have increased more than 400%, so we decided to continue with digital issues even after the pandemic.

We have a dedicated programme team, eager to continue making our programme an important part of your match day experience.

Digital programmes from the last seasons can be found here

Please navigate to Appearance → Widgets in your WordPress dashboard and add some widgets into the Sidefelt widget area.