It was very sad to learn that David Gordon had passed away on Friday. It is 33 years since he wore the yellow and black shirt of EIK, but he left a lasting impression on me and many other fans in his one full season with us.

I was 13 at that time, and the news that my home town club had signed their first foreign import was very exciting. British football had a huge following in Norway bach then, and even though David came from a relatively unknown Northern Irish team we thought he might be the right man to bring promotion for us, after we had been stuck in division four since 1971.

Because of slow bureaucracy in the Norwegian Immigrant Office, David had to wait a few weeks before making his debut. By then EIK was stuck in the bottom half of the table, but with David making up a fine partnership up front with Kåre Skogen, we slowly progressed up the table. And as the season drew to a close we knew a win at Randaberg in our final league fixture would bring promotion.

In a dramatic game we won 4-3 after being 3-1 down at half time. And 500 travelling fans went bananas at the final whistle. It proved to be Davids final competitive game for us. There were attempts to resign him over the next few seasons, but the deals fell through for different reasons.

David kept in touch with several of his friend from his time in Egersund, and about ten years ago I did an interview with him for our match day programme. By then he had taken up coaching, and he finished the interview saying it would be a dream to come back to Norway to coach EIK.

I was too young to know David personally, but he was a huge inspiration for boys of my age, with his competitive style of play and his ability to score vital goals from almost any angle. I only wish we had seen more of him in the EIK shirt. Who knows what our club would have achieved then?

I work with his old team mate Kåre Skogen, who also expressed his sadness on hearing the news. – David was a great player and a smashing bloke, Kåre told me.

The photo at the top of the page shows David on a fishing trip with friend Brian Ogle last summer. Below is a scan from one of our match day programmes from 1984, a translated letter from David to EIK-fans. 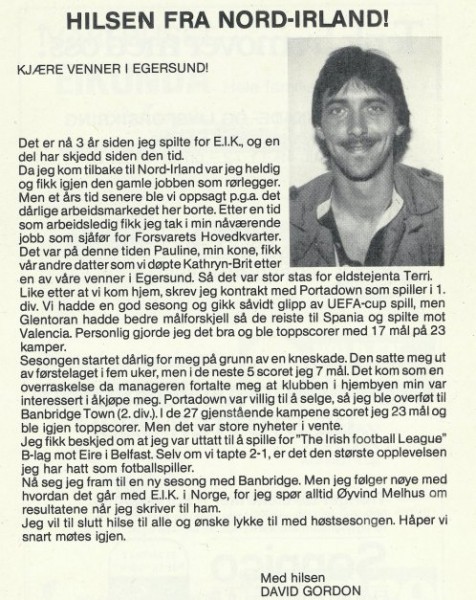 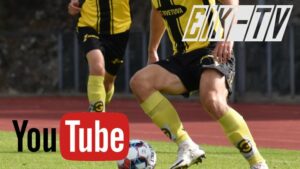